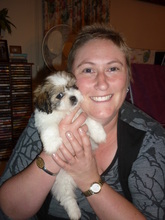 Lisa with her new puppy
Lisa Maree Laney was born at Palmerston North Hospital in the North Island of New Zealand on the 29th of October in the year of 1979. At 7.29 am while the birds were announcing her arrival with their morning chorus Lisa opened her eyes and looked around her new surroundings and has from that moment never looked back. Lisa was a happy and curious baby with a head full of hair. She started her education at Wananga Pre-school and moved on to Milson Primary, choosing to go on to St Peters Collage for her secondary education. From there Lisa went on to Teacher’s Collage in Palmerston North.

As a young child Lisa loved to read and has always had a loving association with books. She once wanted to be a librarian but during her high school years decided on a teaching career. After her Graduation on 16/05/2003 Lisa was unable to be immediately placed into a teaching position and worked at NZ Post for a number of years while doing some relief teaching around the Manawatu area. After a one term relief teaching position at Longburn Adventist Collage Lisa was able to secure a full-time role as their Hospitality Teacher and she held that role for 9 years.

During her time at LAC Lisa made many lifelong friends amongst her colleagues’, students and parents.

It was during this time Lisa started writing her first book, How to Look Boobalicious, inspired partly by her father, Peter Laney,  who published his first children’s picture book My Favourite Animal for his eldest granddaughter. Lisa’s first book which she self-published through Hovding Publishing  established in 2013, is an hilariously true story of her struggle to battle the bulge. Lisa followed that book up with How The Magpie Got Its Name, and Emma, a children’s picture book.

Peter Laney was born on the 09 of November in the year of 1950 at Cromwell Hospital in Central Otago in the South Island of New Zealand. Educated in Dunedin Peter left school and entered the retail sector. After moving around New Zealand destinations he finally settled in Palmerston North in the North Island where he met Lesley and started a family.

Peter eventually took up a career as a Milk tanker driver within the dairy industry. It was while Peter was driving tankers he had the idea to write a book for his grandchildren about his career. The first attempt was much more like an instruction manual than a children’s book. So it was shelved.

When his first grandchild Savanna was only two and a half Peter wrote his first picture book for her. My Favourite Animal


Savanna does the introduction.

A reading at
Central Normal School.

The enthusiastic childern
This was followed up with My Kiwi ABC. About this time Peter came up with the idea of turning his tanker driving story into a story about the tanker giving it a name and a character of its own Hence the birth of Mylo The Milk Tanker    Peter has plans to turn Mylo into a series of children’s picture books. But before embarking on this series Peter wrote I Love Penguins for his second grandchild. It was not long before Peter wrote his first children’s short story book Not Just Any Old Twig  soon to be followed up by Too Many Roosters  his first Mylo story was not started until 2014 eight years after the first inception.

By 2014 Peter had only published My Favourite Animal all his other books were only printed on his home printer and were intended only for family and friends, but when his daughter Lisa Laney   , also a writer, passed away after a long illness Peter was asked by her to continue with the publishing company, Hovding Publishing, she established in 2013 to publish her books through. At the time of her passing Lisa had written three and a half books and only one of these had been published. It became Peter’s job to complete the forth book and get these three published. He also decided to publish his own books through Hovding Publishing.